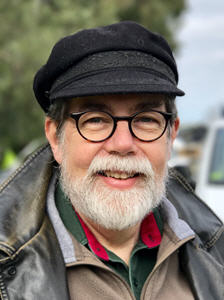 Folk on the Fringe with Phil Young

'Folk On The Fringe' presented by Phil Young, is the show where ‘Music is a passion, not a product’ bringing you music from the Folk genre and its fringes including; Singer/songwriter, Canadian, Celtic, Americana, Anglo-Trad, Folk/Country and all points in between and either side. While the program features mainly International artists, local musicians are supported as well, introduced as part of the mainly album-based content.

New music is featured most weeks along with previously available material, including periodic phone and recorded interviews. The show is pre-recorded and as such phone-in requests are not catered for. Civil comments and queries from listeners are welcome however by email to phlippy7@gmail.com and don’t forget… ‘Don’t do anything I wouldn’t, but if you do… take pictures.’

From the 'Archive' bar below, click on the date of a show to display the list of tracks broadcast. Selecting an entry from the list displays a variety of further information about the artist and track.

If you wish to revisit the displayed episode, click on 'Listen Back' and hear it online from the 3MDR archives. Shows are available for at least 6 mths following the broadcast date.

Maybe you'd like to hear more from the artists played on the show over the years. In this case go to Spotify and listen to the ' Folk On The Fringe Faves' playlist. All the artists and most of the tracks in this growing collection are selected individually (in no particular order) from the FOTF library and have previously featured on the show. Chances are if you're a  follower you'll enjoy a lot of the music that comes up.

Phil would like to thank the following Folk On The Fringe show subscribers and sponsors both new and renewed: