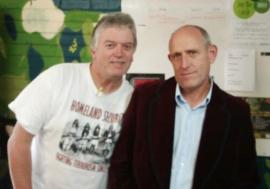 This Friday (29 April) will be the last program featuring the Maestro.  He is pursuing other ventures which he wants to complete some time this century.  3mdr  has been a great love of his since 2001 and he will miss what he calls "the therapy" every Friday morning since March 2003 when he and Dale 'The Professor' Blair began a three year partnership. When this ended The Magnate (Robert Gearon) stepped up to the microphone and proved to be the ying to  the Maestro's yang.  On Monday they did their last of many outside broadcasts for the Upwey/Belgrave RSL Anzac Day ceremony which featured interviews with veterans who had interesting stories to tell.

Tune in for the last time at 7.00 a.m. to hear the Maestro and the Magnate live on air playing their 'no sausage music' and their last interview will feature Chris Helder, about performance and motivation which he writes about in his book USEFUL BELIEF. Over the 13 years the Friday Breakfast Lounge has been running they have interviewed most writers and musicians who have put out an album or book or who they just wanted to chat with, to see what they were up to. Such as Joe Dolce who is no one hit wonder.

The Maestro promises to include his favourite music (more than usual) in his last show so tune in or listen back via the 3mdr.com website. Maybe someone like Keef and Billy will make a last long distance call to the show. Their Facebook page includes listeners from around the world and for reasons not known to either, many from Holland.

Friday (15 April) from about 8.15 a.m.  the Maestro was surrounded by two  of the greats in Mic Conway and Matthew Fagan who performed live in the studio and in between talked about their almost sold out world tour which includes the Upwey RSL on Saturday 16 April. Some tickets still available through Trybooking. They performed three and a half songs live to air (well, Matthew did forget the lyrics to his song...)and it was a moment where you would not want a better job than being a presenter at 3MDR.

We also spoke to Kate Lucas from about 8.00 a.m. about Coda Chroma's new single Ones and Ohs and their appearance next Friday to launch their single. Their album is to follow later in the year.

The Friday Breakfast Lounge (Limited Edition) will cease to be in two weeks time. The last show will be on Friday 29 April.  We have new fields to harrow and anyway, more about that in the next two weeks. We thank our loyal band of listeners over the past ten or so years for their support.

Friday 8 April we played an interview we had with Suzannah Espie recorded at the Port Fairy Folk Festival.

Friday 18 March we featured interviews with Colin Hay (formerly of Men At Work and now Colin Hay) around 8.00 a.m. and at 8.25 a.m. with  Diane Fagan the author of Jodie's Rescue (published by Short Stop Press.  Then around 8.40 a.m. we spoke to Jordie Lane about his new single Frederick Steele McNeil Ferguson and his appearance at the Gasometer later in the evening. We played 89 percent Australian content today.  There will be no Friday Breakfast Lounge (Limited Edition) next Friday (Good Friday). The Magnate was absent today and we understand he had eaten one too many Easter buns...

Friday 4 March we spoke to Sarah Ayoub about her book THE YEARBOOK COMMITTEE.

Friday 26 February we spoke to Tim Fergusson from the Doug Anthony Allstars and their appearance at the Comedy Festival. This was around 8.25 a.m. to allow him some valuable sleep in time. He also spoke about his experience with MS.  Prior to that around 8.00 a.m. we spoke to Ross from the Gemco Players  about the Canterbury Tales performance.  Lastly but not leastly around 8.40 a.m. we spoke to Edward Nass one of the BADFOLK people about their forthcoming events.

It was Friday 19 February when we spoke to Zac from the band Woodlock and the Summer In The Hills music program. This was around 7.45 a.m.  At 8.00 a.m. the rising star Ruby Boots spoke to us about her album Solitude and her Miss You Already Tour. Finally at 8.25 a.m. we spoke to Mark Waugh about his album Mafeking Hill.

We had our last show for the year on Friday 11 December featuring an interview with Graham Winter who spoke about his book THINK ONE TEAM (8.00 a.m.) which is essential reading for anyone who is trying to run a successful business and managing people.

Friday 4 December, 2015  we featured Cate Davis  talking about her book FROM GALLIPOLI TO COOPERS CREEK (7.40 A.M.) ; then we spoke to Magic Barclay about her book STOP BEING FAT (love yourself skinny) and how to be the you you know you can be; and then at 8.30 a.m. we had a chat with Damian Cowell about his new album DAMIAN COWELL'S DISCO MACHINE which is out now. Certainly a disco album with a difference...

FRIDAY 27 November we spoke to Justin Fankhauser about SHUT UP GET UP AND GIVE IT A GO (8.00 A.M.) and  at 8.25 a.m. we spoke to James Cockington about his book TURNING JAPANESE which is about the history of Japanese cars in Australia.

Friday (20 November) we spoke to Don Watson about his newly released book WORST WORDS (published by Vintage Australia) and Ron Williams about the next set of books in the series BORN IN.  We had books for 1966 and 1956.

On Friday (13 November) we spoke again with Michael Veitch about his play FLAK which was being performed at the Burrinja Theatre up  Upwey  on the weekend.

Friday (30 October) we  interviewed two of our musical greats in Russell Morris (8.00 a.m.) who  talked about his new album Red Dirt Red Heart and  at 8.25 a.m.  Mick Thomas spoke ​about his new live album Welcome to Zimbabwe.

Friday (23 October) we  interviewed Suzannah Espie about her brilliant album Mother's Not Feeling Herself Today.  The Maestro believes it is easily the best album of 2015.   We spoke to Suzannah from about 8.10 a.m. and showcased three songs from the album.

On Friday 16 October we  interviewed Leonie Alldis about the Australian whodunnit covering 300 deliberately lit fires  over a four year period during the 1960s.  The book is called RED HOT. We spoke to Leonie  around 8.00 a.m. and then at 8.25 a.m. spoke to Matt Walker from Lost Ragas who spoke about their new  album Trans Atlantic Highway. Plus his life as a musician and having to do other jobs to keep going. It's all about the dream.

The previous week we spoke to  Dr Bruce Wells about HAPPINESS ANYWHERE ANYTIME as published by Eudaimonia BJ Books. This was around 8.00 a.m. on Friday 9 October. After that we interviewed James Knight about HENRY & BANJO (published by Hachete) two of the Maestro's favourite writers.

The Friday Breakfast Lounge (Limited Edition) with the Maestro (Peter Haddow) and the Magnate (Robert Gearon).

It is where no sausuage music plays! The highest rating program on a Friday bursting out from Emerald each Friday morning between 7-9.

The Maestro and The Magnate  are like the missing link, but the issue with them is who is the one missing the link. Each blame the other. One is in the stands eating a pie while the other is quaffing champers and waiter service in a corporate box at the MCG. Both go overseas for trips, one to Tasmania or Phillip Island while the other hits Europe or the USA.

Around 8.00 a.m. and again at 8.25 a.m. there is an interview with a writer,  musician or some other interesting bod. Often there is give aways such as books, cd or tickets to concerts.

The Friday Breakfast Lounge (Limited Edition) highlights Australian music and the  slant is Australian, because we are.

The Friday Breakfast Lounge would like to thank the following Performer subscriber:

Edward Nass who has recently put out an album Doin' Nothin' and one of the power houses at the BADFOLK in Berwick.