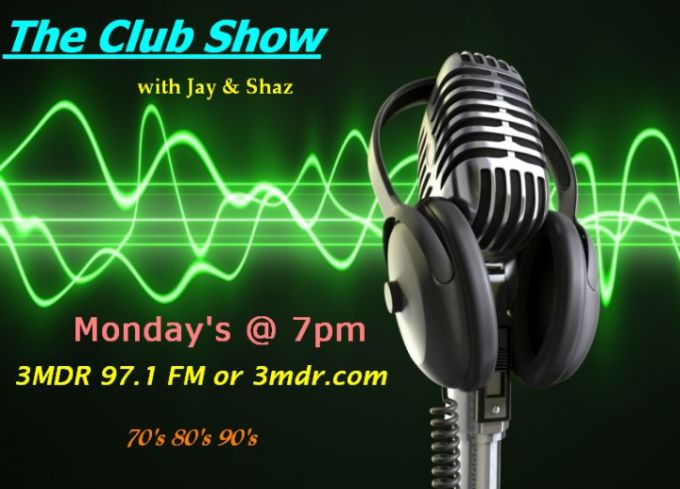 The Club Show with Jay and Shaz

A mix of Australian & International club artists of 70's, 80's & 90's. Also we play a new (latest) track and sometimes a track from the 00's. Each show features a artist DOUBLE SHOT of two songs from the same artist.

The Club Show now in it's 16th year has been "On Air" since 2002 and plays a mix of music that wasn't played on commercial radio back in the 80's so it's good for those listeners to enjoy those memories every Monday evening from 8pm (AEST). We also have weather report with Jono & Keno with sound effects haha LOL.

It is with great sadness that 3MDR reports on the sudden passing of The Club Show’s Jason Shaw at the all too young age of 49.

Jason was a highly valued member of the 3MDR family since joining the radio station in 2001.  The Club Show was a Monday evening favourite for many listeners as Jason, along with a number of co-hosts over the years, played a mix of Australian and international club artists from the 70s, 80s and 90s.  Jason’s passion for the genre extended beyond broadcasting on radio and, as DJ Red, he touched the hearts of many  club and dance music lovers at parties, functions and clubs.

Monday nights will never be the same on 3MDR.  Jason and his good friend Dazmo (pictured below at 3MDR's 30th Anniversary Gala Ball 2015) presented back to back programs for many years on 97.1fm with The Club Show leading into The Late Night Shenanigans each week.

Jason first stepped into the wonderful world of community broadcasting in 1997 at a station called CITY-FM.  This station missed out on a permanent broadcasting licence and Jason then became a member of 3MDR to continue his passion for broadcasting.

Since joining 3MDR, aside from presenting a weekly program, Jason was actively involved in many aspects of the operations assisting with production work, sourcing and installing equipment, website maintenance and Community Service Announcements.  Always willing to help out around the station, Jason was a warm and welcoming member of the organisation and will be missed greatly by his family, friends, fellow presenters, listeners and members of community radio 3MDR.

3MDR extends its deepest sympathies to Jason’s family at this sad time.